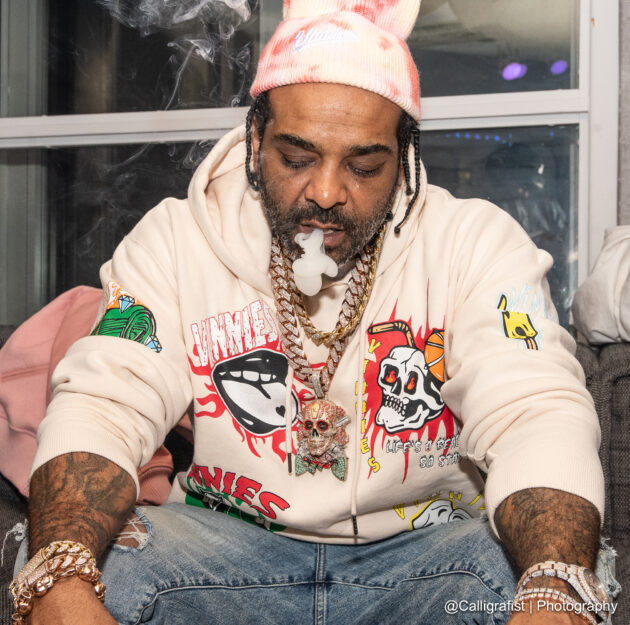 Rapper and business mogul Jim Jones’ Media day was full of questions about his Gangsta Grillz Mixtape We Set The Trendz, with a song by the same name steadily approaching Gold status. Jones spoke on his Crypto Currency “Capo Coin”, his favorite song on the Project, and much more… When asked about the new voices of Hip Hop in NYC; Dusty Locane, Dyce Payso, Ditta, Yellow Tape, and Salah were some of the names he mentioned.

However, What stuck out most was the conversation of rap music and its connection to gun violence in his home, New York City. One question asked in particular “Jim, You’re not shy of the streets, and everyone knows you come from that… My question is because a lot of kids have been dying and going to Jail. What advice would you have for the kids? From how you transitioned from the streets to the music industry and became a platinum artist, what advice would you give to them?” Jones states “The violence in the streets is terrible right now.” Jones even deemed it “Scary.” His advice is as follows “as an artist, you have to make a choice, you can’t do both, I know that.” “You gotta’ move smart… a lot of these kids are missing their moral compass,”. He continues “It wasn’t like that so much when we were coming up. This is a touchy subject that I always have big conversations about because I want to see our people do better, especially in New York. I wanna see the youngsters do better, but it’s not too many resources for the youngsters to get money, and for the youngsters to do good. Everything is so crazy out here.. We need more leaders, more opportunities, more things for these youngsters to do to see a future for themselves. Until we get that, none of it is going nowhere… I don’t think it’s gonna stop.“”

This Comment was so perfectly timed as just the day before a young up-and-coming rapper from Canarsie that goes by “T-Dott” Famously known for creating the woo walk and association with Pop smoke, Fivio, was killed on his doorstep. This just days after rapper Nas Blixy was also fatally shot in his face. Today’s music is full of bars surrounding the topic of killing; though we enjoy this music, what are we supporting? During the session of questions, Jones shared his thoughts on DJ Drewski’s vow to not play the music that promotes violence. Jim stated that he respects this initiative. He also said you need to use your music to promote a greater message.

Being a New York native and living in Canarsie, Brooklyn, I have seen many young lives lost in the previous three years. The increase in violence is effortlessly shown in the fact that rappers went from making diss records to melodically poking fun at lives taken. In closing we are grateful for Jim sharing his life experiences with us; and prayerfully look forward to more peace and success within the younger generations.